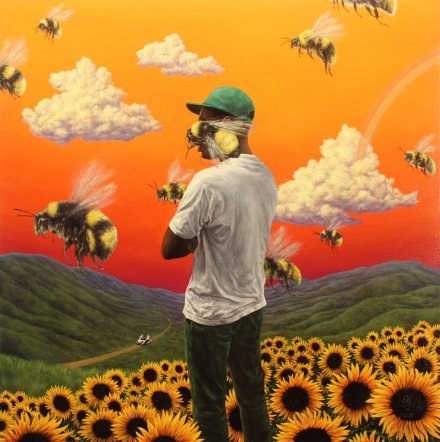 This is a great album from Tyler that is fluid and doesn’t need defending like his previous releases. he shows not only great talent, but personal growth as well.

The production is not as aggressive as on his last album and with the softer tones comes a project that is much easier to listen to. The songs are softer but without losing all of their hardness and shock factor in some cases. This is a side of Tyler the world needed to see and help connect with him on a more human level, which is easier accomplished with this backdrop.

The lyricism is great with a lot of smart wordplay and a lot of clever rhymes. Tyler tones down his delivery but has built up more skill which helps him add to his descriptive ability that is another positive point of this project. With the growth shown from this, there are no issues with Tyler’s performance.

The features are well chosen and fit into their respective songs easily and without sounding forced. Each shows what they are capable of without over stepping and out shining the main artist. there is a good mix of singers with this album as well, which adds another level of entertainment to an already interesting release.

Overall, this is the best album that Tyler has released as it encompasses a wider audience without alienating so many. Hopefully he can carry this mentality forward.