This release is a great showing of Bugzy Malone’s talent and how he is a force to be reckoned with. There is a song for each audience on here, but it may not connect totally because of the backings.

The production is good, don’t be mistaken, but it fades away a little too much in places, taking from the impact of the songs. Each beat is still individual and creates the right atmosphere for the project. However they do not totally support Malone and something with a little more push could lift this higher on the way to success.

The lyricism is great, with good story telling elements as well as wordplay. Bugzy Malone proves he deserves a title in the rap game, but knowing what happened to the last King in the North (Game Of Thrones) could show it is not always the best path to take. Let us hope he can continue to carry his brand and his skills forward to future releases.

The features are good and help show some good chemistry with the main artist. They each show their own skills and break up the hearing of one voice as well. Maybe some more guests could show that Bugzy can work with a range of people, but leaving more time to show his own abilities was still a smart move.

Overall, this release shows that Bugzy Malone definitely has a strong following that he appeals to. Now it is just a case of seeing if he can broaden that audience to fill the south as well. 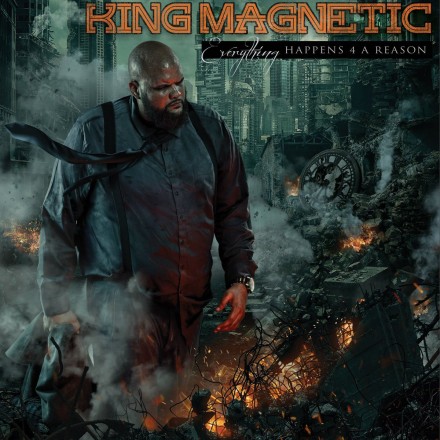 This is a strong release from King Magnetic with a lot of replay ability. There is plenty of aggression and energy to help make this an entertaining listen.

The production is great with a lot of easy listening combined with haunting sounds to help punctuate King Magnetic’s messages. The beats flow together very well and help make this a cohesive full listen through. Maybe something a little more pop based could bring in a few more listeners, however King Magnetic knows who his music is aimed at at works well for that demographic.

The lyricism is good, but not fantastic. King Magnetic has a strong delivery that helps boost the impact of his wordplay, but a lot of the punch lands in the themes in the music. There is a chance that some more complex wordplay would help boost the level of detail, but might have lost the impact of the message.

The features are a good selection as they sound like they have chemistry with King Magnetic which always translates into better songs. Each has a style that compliments Magnetics own and helps make better verses for everyone. Maybe some singers could give a little more depth, but this is a great selection of guests.

Overall, this is a rock solid release that is a good addition to King Magnetic’s catalogue. With some aggressive songs and a few softer ones, everyone should give this album a try and more will like it than they might expect.

This album is full of all the things listeners love about KXNG Crooked. He is focused and that keeps his work sharp and following the theme of this project.

The production is great with the atmosphere reflecting exactly the message of the tracks. The beats are all dark to reflect the subject matter but are smooth enough to transition easily between the songs without becoming muddled together. Maybe something more light hearted could show another side of Crooked, but he excels on these tracks, so no one will be too bothered.

The lyricism is some of the best that has been released in recent years. Crooked uses some intensely descriptive and clever wordplay to make a project laced with absolute bars. His style might not be for everyone, but his rhymes should suit all.

The features are good as they help add a little more depth to this album. Each may not be in it for very long, but the fact they contributed is more than enough with some legends showing enough respect to this west coast MC that he is brought to some listeners attention at all. The way this is put together with the guests is great as they don’t control the project, just gently shape it.

Overall, this album is great to listen to from top to bottom, as long as you can get on board with the concept. KXNG Crooked is one of the best lyricists out there and should be respected by all hip hop fans as such.

This album s a good introduction to the direction Pusha T is heading and he shows his ability on every track. The way this project has turned out, whatever comes next will be incredible.

The production is on the dark side but with enough energy to keep the listener interested. Each song has a standout beat that would not be confused with any other song on the album. Something cheerier could show that Pusha T can have more of a balance, but that is not in keeping with the theme of the project.

The lyricism is good with Pusha T doing plenty to keep his rhymes interesting. Using a range of techniques he adds a lot of imagery and impact to his words to make them land harder with the audiance. There are no real problems with what Pusha T has delivered on this project.

The features do a good job of fleshing out the songs on this album so that they are enjoyable and provide comparison points for Pusha T. Each brings a good verse that pumps up the project and makes some good chemistry on the project. Maybe a few singers could help to balance out this album a bit more, but the guests really work well here.

Overall, this is a great album for those waiting for Pusha T to keep pushing rap forward. He only does well here so let’s hope he carries this momentum forward.

This is an album intended to provoke thought and, to an extent, it does. However it lacks the energy to really make the songs stick and make the messages stay with the listener.

The production is good as individual tracks and all have the right tone for the messages. Each has an atmosphere that helps the impact of the messages when listneing to it. However they lack luster and do not have a lot ofreplay ability.

The lyricism is great and shows amazing creativity from King Los. His rhymes paint vivid pictures of what he is describing that unfortunately fade away as a new picture takes its place. Maybe changing up the content to less conscious naterial could help Los make tracks people will want to replay.

The features all add an extra dimension to the project as they are mostly singing which reflects well with King Los’ rap style. All the guests bring good verses that build each track up and help increase how cohesive the tracks are. A few more features that would push Los lyrically could be good, but these are all good choices.

Overall, this is an enjoyable album for the emotional listener who wants to hear of darker, thought provoking topics. However if you want something lighter, this may not be for you.

This album has more classic trap music from one of the best to make it, and the way the project is structured makes all of it enjoyable. It is fairly short in comparison to some of Gucci’s mixtapes which helps keep it cohesive and enjoyable.

The production is good and works well with the type of music Gucci makes. On this project, each beat is diversified and helps make each track standout and stop them rolling into one. As this has been a problem on previous projects, it is good to hear a choicer selection of beats used on a Gucci project.

The lyricism is not complex but can be enjoyable. While his actual wordplay is fairly average, and his delivery can become stale, his continuous working of the beats with pure catchiness makes an entertaining listen. He still may want to make his wordplay more complicated but there is no doubt that Gucci makes energetic music.

The features are good as they are different enough from Gucci that they have impact on the tracks. Each has a good verse that shows the main artist can work well with others. However it may be good for Gucci to look for features further afield from his own style.

Overall, this is an enjoyable mixtape with a lot of highlights. Gucci is showing he is still a force in Hip Hop and that people shouldn’t forget about him.

This is an enjoyable listen if you are already familiar with Peewee Longway and his particular rap style, but it could be difficult for this mixtape to bring in many more listeners for the rapper. The begining sets the tone for the majority but there are some more interesting tracks at the end if you can make it that far.

The production is a touch bland in places but is alright overall. Some tracks require Longway to carry them along with his rapping and have no substance of thier own which can lead to a very repetitive listen. With some more solid production to go with instead of trying to carry each song based solely on your own talent, this project could have had some more replay ability.

The lyricism is poor and Longway relies heavily on delivery and features for each song to be enjoyable. The only problem with that is his delivery can become stale after a while because he tends to use one vocal tone and creates a monotone listening experiance. If you are looking to carry every song on rap alone, you need to make sure you can pull it off.

The features are good and help bring a level of diversity that the project sorely needs. Each puts in a good verse and, while being in the same vein as Peewee Longway, sounds different and helps the track they are on become easier to listen to as a result. Some guests a bit further afield from his comfort zone may create an easier to listen to but these features add a lot to this project.

Overall, this is not a great effort from Peewee Longway but it can be enjoyable to people who enjoy formulaic and generic sounding songs, but not many others. He needs to try and seperate himself from the rest of the pack and not simply making more music that almost anyone else could have made.