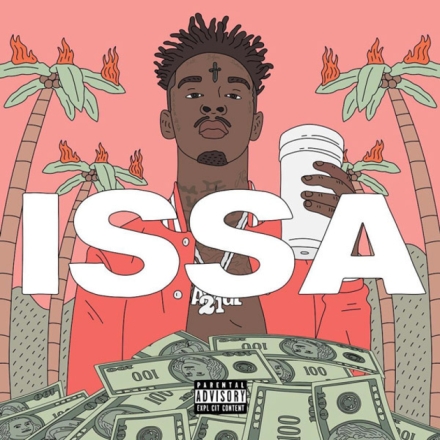 This release is good as a concept, but lacks the push to make it a success. 21 Savage starts off well, but runs out of steam towards the end with a few missteps along the way.

The production is great, with a more sweetened taste to it rather than the darker sounds some might have been expecting. Each beat has similar elements, but works well with Savage and his delivery. It is good that Savage is trying to spread his musical wings, and not straying too far from his musical roots is definitely a good choice.

The lyricism is alright, as Savage uses some wordplay for descriptive power. However, at a run time of fifty seven minutes or so, he does not have the depth in his rhymes to keep them hitting hard for the whole project. Some improvement, whether it be in changes of flow or lyrical prowess, would go a long way here.

Overall, with no features to help break up the monotony of 21 Savage’s drawling delivery, this shows some want not to be typecast as any one kind of rapper. However, some work is done as Savage sounds especially out of place on the love songs and some consolidation of album length would help too.

This is a mixtape populated with generic songs with a slightly above average delivery and extremely average wordplay. Lil Reese is doing little to push himself into the public eye.

The production is good, but it doesn’t act as great backing. Each one can be enjoyed and there is a lot of cohesion between the beats. A few more backings where Lil Reese doesn’t struggle to be better than the beat would improve this project, however that does not appear ot be his style.

The lyricism is average and does not really add to the experiance of the songs, which is unfortunate. Lil Reese uses some good techniques but there is nothing memorable about what he is rapping. He needs to develop more impact with what he is saying by delivery and substance.

The features are alright and show how much Lil Reese needs to improve. Each brings a good verse and a better chemistry with the production. Some features that push Lil Reese to new heights without over shadowing him would be better choices.

Overall, this mixtape could be better crafted but possesses enough falr that people who are already fans of Lil Reese could enjoy it. However for the masses, it may fall flat.